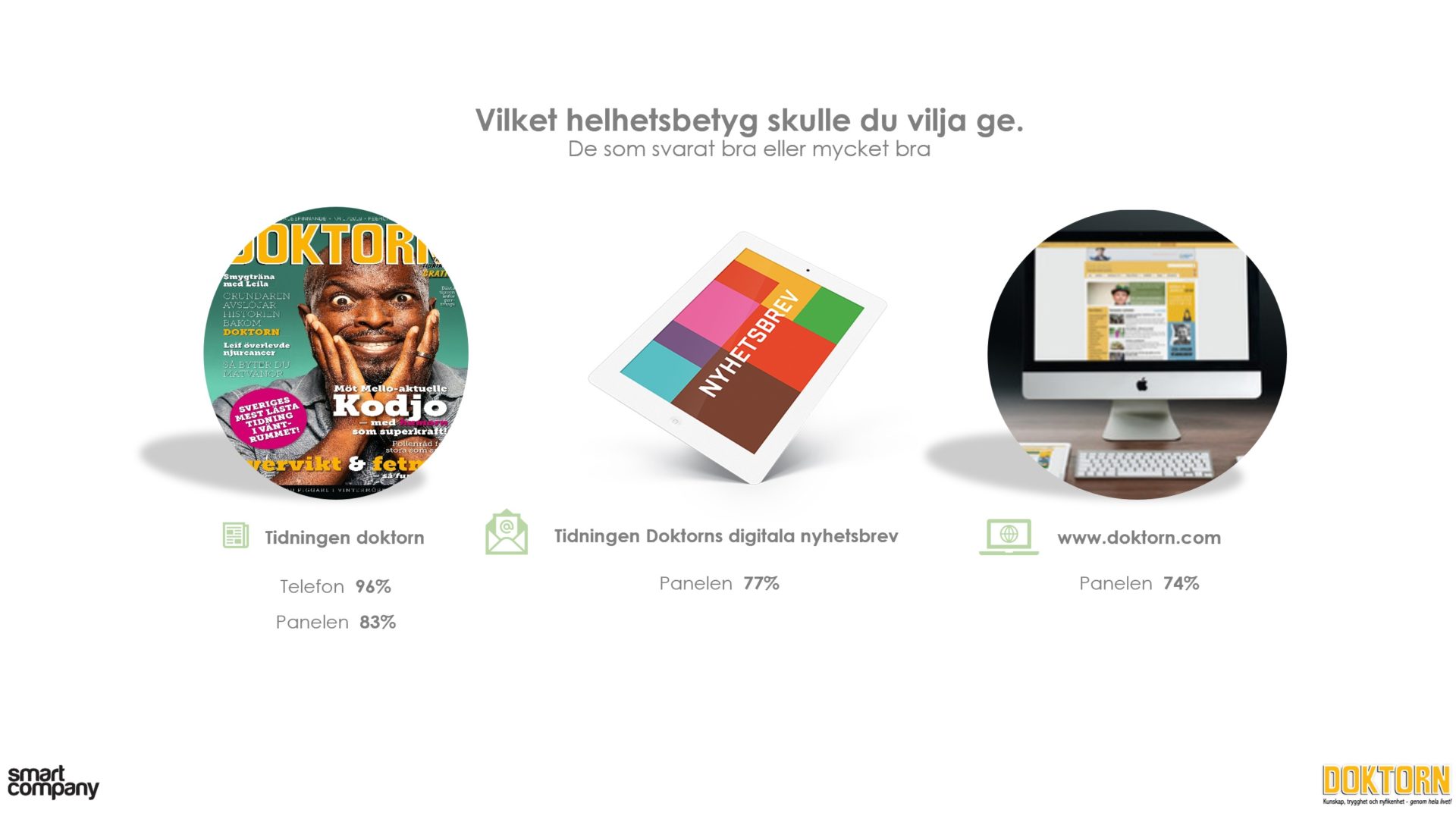 A new large reader survey conducted by Smart Company on behalf of Add Health Media shows that DOKTORN is an incredibly appreciated channel and that readers choose to act after seeing ads while the magazine maintains its strong credibility. A difficult-to-maneuver balancing act that you have successfully succeeded with.

– It is great that 96 and 83 percent think that Doktorn is good and very good, it is just to humbly thank for the very nice rating, says Anders Åker, editor in chief of Doktorn.

In the survey, they have chosen to ask both subscribers who have Doktorn +, the extra well-filled subscription edition, and readers of the free version that is available at care clinics across the country. Smart Company, which is behind the survey and which works with, among other things, media analyzes for a number of large companies and media companies, has solid experience of reader surveys.

– The doctor is a strong brand, we noticed that in both groups in the survey. We chose to divide it because there are slightly different target groups if you subscribe to the magazine and get it directly in your mailbox or if you visit a care clinic and read the free version there. The survey focuses on print, but we have also asked questions about digital platforms, says Maria Juréhn, project manager at Smart Company and who has compiled the survey.

One figure that surprised is the high impact of advertising.

– We could see that 60 percent read and perceive the ads and that over 54 percent believe that the magazine’s ads are valuable and useful. This shows a very high level of relevance, ie that the magazine and the ads match. But the most surprising figure is that almost 70 percent who have seen or read an ad in the newspaper have either sought more information about the product or service being advertised or even bought the product or service. There we talk call to action and that newspaper as a medium is far from dead, states Maria Juréhn.

The survey also shows the fact that the newspaper has ads does not affect the willingness to read it or the newspaper’s credibility.

– It is fun to be able to combine the measurements Userreport does for us online where we have for almost ten years gained 96 percent credibility with the results we got in the reader survey. 95 percent of subscribers and 74 percent of those who read the free edition believe the magazine is credible. In addition, over 60 percent answer that the magazine is advisory and useful, which is really relevant as it is our mission to increase knowledge about medicine, health and well-being, states Anders Åker.

The survey also shows that the magazine that is distributed in a waiting room environment has an unusually long reading time where the analysis is that the visitor simply reads the magazine almost all the time as one waits.

– We have always talked about a “rewarding wait” and I hope this motivates even more hospitals, care clinics and other care places to place the DOCTOR in the waiting rooms. We do not get away from the fact that readers simply like the magazine really well, so then you make the patients happy and that is never wrong, Anders Åker concludes.

The survey is based on responses from both readers of the magazine Doktorn and on responses from subscribers of Doktorn +, the subscription edition of the magazine. It has also chosen to ask some questions about the digital platforms that are included in the brand. The subscribers, 300 respondents, have been called by phone while the readers of the free edition, 1,600 people, have answered questions via the Health Panel, run by Cint. The survey has been compiled and analyzed by Smart Company.

96 percent (telephone) and 83 percent (panel) give the magazine DOKTORN the overall rating good or very good.

95 percent (telephone) and 74 percent (panel) consider the newspaper to be credible.

74 percent (panel) think that DOKTORN.com is good or very good.

47 percent (both groups) read the magazine to be updated in various areas of medicine, health and well-being.

Do you want the magazine for your reception?
Contact Kristofer Backmark, logistics and service manager
[email protected] , 0733 64 84 91

When the Network against Cancer organizes this year's edition of World Cancer Day at the Sheraton Hotel in central Stockholm, the DOCTOR is represented on…